When I originally wrote the custom string blocks for Scratch, I posted a discussion on the ScratchEd site to let people know about them. I received a message a couple of weeks ago about adding a block that allows a string to be searched for a specific string (sub string). This is certainly a useful addition to the library of blocks and one I wanted to add when I had some free time.

How Does It Work?

So, how does the block work? Well, its actually very simple to follow. The image below shows the program code for the block. 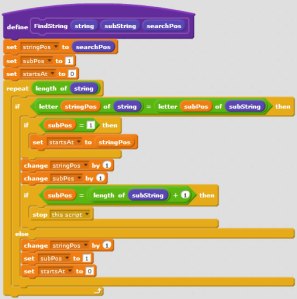 When I first started writing the block, my first version used two loops (nested loops). The block worked fine, but after looking at the finished block, I realised that it could be re-written to use just one loop, making it a little easier to follow. So, lets break down the block above into logical steps to understand whats going on.

2. We initialise the startsAt variable to zero. Remember this variable holds the start position of our string we are searching for when the block has completed.

3. We now loop over the whole of the string to search for character by character, doing the following:

Its actually quite tricky to clearly explain in words what the block is doing, the best way to understand it is to look at it in Scratch, it really won’t be that hard to follow.

How Can I Search More Than Once Occurrence?

I did say at the beginning of this post that the block will only search for the first occurrence of a string, but what if you want to search for more than one occurrence of the same string? Well its very simple, all we need to do is keep calling the FindString block with a new start position. The easiest way is to do this in a loop and keep calling the block until startsAt equals zero. We will change the start position of each call to the FindString block by the position the last occurrence was found plus 1 character, this ensures we don’t find the same occurrence twice.

I have written a simple example below, that inserts all the positions of the occurrences in a list. The string we are going to search is “My cat likes to eat cat food. He is a happy cat” (I don’t have a cat by the way!). We will search for all the occurrences of the word cat. Shown below is the Scratch code to do this. 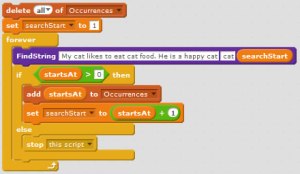 Once this code has been run, the Occurances list will look as follows:

As you see, searching for multiple occurrences of string is quite a simple process. I hope you find the addition of this block useful and feel free to use it in any way you like.