Whenever I need to examine HTTP/HTTPS traffic, I use Fiddler. Fiddler can be a lifesaver when debugging problems, but can also be an extremely useful tool when you want to see what an application sending and receiving.

As I have had some spare time on my hands over the festive break (a rarity these days!!), I wanted to have a look at API calls from some apps on my Windows Phone. Fiddler should fit the bill for this. A few days ago, I upgraded my home machine to run Windows 8.1, so I needed to do a re-install of Fiddler. If you visit http://fiddler2.com/get-fiddler you can download the required build for you operating system. As I have Windows 8.1, I downloaded Fiddler4. Once you have downloaded Fiddler, follow the steps below to set up Fiddler and your phone for traffic capture.

When you have run Fiddler, select the menu option Tools -> Fiddler Options and select the Connections tab. You will see the dialog box that is shown below: 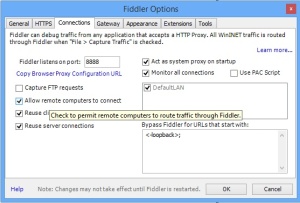 You must now select the checkbox Allow remote computers to connect. 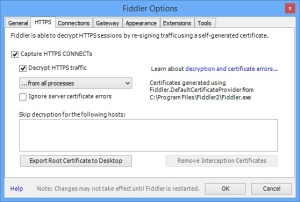 If you haven’t already restart Fiddler. Upon restarting Fiddler, the Windows Firewall warning may pop up.

We now need to perform some configuration tasks on the phone. Ensure your phone is connected to your WiFi network and perform the following steps.

In order for traffic to be captured by Fiddler, we need to set the WiFi proxy settings for the phones WiFi connection. Long tap on your WiFi connection within the WiFi settings on your phone. An example of this is shown below: 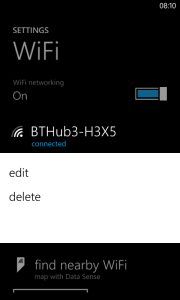 Select the edit option. You will then be presented with the following:

Swipe On to switch on the proxy functionality.

In the Server/URL setting, type in the IP Address of the computer where you installed Fiddler. You then need to specify the Port number. By default, Fiddler will use 8888. If you have changed this within the Fiddler settings, make sure you use this port number. Click the tick to save your settings.

We now need to download the Fiddler root certificate to the phone. Open Internet Explorer on your phone and key in the URL http://<<server>>:8888/fiddlerroot.cer. <<server>> will be the IP Address of the machine where you installed Fiddler. Using the settings from the example screenshots above, you would use http://192.168.1.78:8888/fiddlerroot.cer. Your phone will then show the following in Internet Explorer:

Tap install to install the Fiddler root certificate to your phone.

And that’s it!! As long as Fiddler is running and you have the proxy settings correctly configured on your phone, you should now be able to monitor the HTTP/HTTPS traffic from your Windows Phone.

When you have finished monitoring traffic and you have shut down Fiddler, remember to switch of the proxy functionality on your phone. If you don’t do this, you will not be able to use the internet from your WiFi connection, as all traffic will be sent to the proxy, which obviously will not be running.

The majority of my systems integration work requires me to work with 3rd party API’s or to create my own APIs. When creating my own, obviously I have full control over what the API call needs to be sent and what it will return and what shape its in. Pretty much all of my APIs work with XML data, its nice and easy to work with and the majority of people understand it at a glance.

More recently I was passed a set of 3rd party APIs that work with JSON (JavaScript Object Notation). For the purposes of this post, I am assuming that you know what JSON is and are comfortable with it. If you want to read more on JSON, the following link will take you over to Wikipedia where you can read more – http://en.wikipedia.org/wiki/JSON.

We have a simple set of Name/Value pairs. In order to work with this data, we certainly don’t want to start writing code to parse the name/value pairs, its just not worth it. Ideally we would like to return this data in an object. To do this we can deserialize the JSON string. The following code snippet will explain how to do this. In order for this code to work, ensure that you have the following using’s at the top of your code:

The chances are, you will also need to add a reference to System.Runtime.Serialization in your Visual Studio project. With all of this done, you should now be able to work with the following code.

As already mentioned, we want to deserialize the JSON string into an object. In order to do this, we obviously need to create a class, we will call this class Person. Pay particular attention to the attributes used within the class declaration and the properties.

You will see that our properties are named exactly the same as the name in the name/value pairs in the JSON string. We can then write the following code to deserialize the string.

Our deserialized string is now in the object obj (which is of the type Person). With this in mind, we can access the properties of the object by simply using obj.forename, obj.surname, etc. To make life a little easier, you could always set the object obj as follows:

Working with an Array of JSON Objects

What do we do if we have more than one person defined in our JSON string, such as:

As it stands, our deserialization code will not work with this JSON string, we need a little tweaking. Basically, we need to return a list of People objects, so our code will now look as follows:

Notice that we have now specified List<Person> in our code. We can then use the following to display the person data to the console:

Now this is all very well, but do we really want to write that same block of code each time we want to work with a different data type? Well, probably not!! and this is where a quick conversion of the code to a generic method comes in handy. By simply creating the following generic method, we now have a piece of code that should work with any data type:

Rewriting the above deserialization now becomes as simple as this:

Whilst I am not going to cover the multitude of different JSON strings you could work with, there is one more I want to show you. Consider the following string (formatted for easier reading):

We now have an address included, which is made up of name/value pairs in its own right. So how do we deserialize this kind of string? Well, its actually very easy. All we have to do is create a new class for the address data and add a property of the type address to the Person class, as follows:

Our Person class is then modified as follows:

You will more than likely want to name your class properties differently to their JSON counterparts. Consider the possibility of having the name/value pair current-account-balance:210.00. Personally I would not want a property in my class named current-account-balance!! To overcome this, we can slightly modify the [DataMember] attribute declaration to the following:

This then defines a property in our class called AccountBalance that will contain the value of the current-account-balance.

As you can guess, there is an opposite to deserializing, which is serializing. Consider the fact that we have created a Person object, or a list of Person objects and we want to convert this to a JSON string and return this from an API call. As with the deserialization, we need to write a generic method that will convert any type to its JSON equivalent. This method is as follows:

If we then create a Person object as follows:

We can simply convert it to a JSON string using the method call:

Or with a list of Person objects, as follows:

As you can see, working with JSON data in C# is not at all difficult with the facilities built into the .NET Framework. If you are planning to work with JSON data to a larger extent, it is worth spending time investigating JSON further to become comfortable with looking at the data and being able to model it using classes.